It’s the most wonderful week of the year!! …in San Diego at least.

The tourists are gone, the kiddos are back in school… the beaches are finally clear, Halloween is over… and you know what that means… BEER WEEK IS UPON US!!!

For anyone who doesn’t know (which I seriously doubt if you found yourself on this blog)… SDBW is the single best week in San Diego each year. The only sad part, is we’re already over halfway through it!

What is beer week? And why do we love it?

San Diego Brewer’s Guild puts on and sponsors a big beer fest (Guild Fest) to kick things off, and a beer garden to close it out; they’re also responsible for the SD Beer app and the existence of the whole week in the first place.

There are events every day, at pretty much every brewery and beer bar throughout this week.  This year, there were nearly 400 events on the calendar before the week even officially kicked off! And we aren’t talking about just a new keg or two, there are a huge variety of events going on this week.

It’s everything we love about the Indie Beer community, but on level 15/10.

Its not just breweries hosting these events either—Shoutout to San Diego Beer Bars!!

They are also hosting amazing lineups and events all week long; namely, tap-takeovers, multi-course dinners, and a ton of daily specials. From O’Brein’s to Hamilton’s to Common Theory to Tiger!Tiger!, beer bars are one of the best places to enjoy SDBW and the variety of great beers and food we have here in the Capital of Craft… and are arguably the best part of the San Diego Indie Beer scene any day of the year. (We can argue about this later, I promise.)

Here’s my favorite part about this year’s beer week. There’s an app (and a pretty good one at that) to help navigate all the events going on this week— use it!

You can sort by date, by map, or by event type. Not to mention, you can earn points when you check in at events and not only win some bragging rights, but also the promise of “fun prizes” for the people with the most points. Seriously though, this app is incredibly helpful and somehow makes the 100’s of event options not completely overwhelming. Thanks SD Brewer’s Guild!

Speaking of which, we kicked things off with the Guild Fest, hosted by SD Brewers. In short, it was a hell of a time! 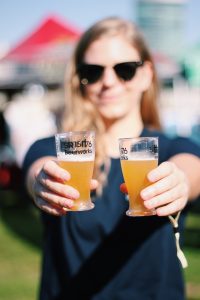 With over 100 beers to taste, and 124 breweries, it was a great event. Add in the incredible venue and unreal weather… it was a great day to be in a San Diego beer fan.
If you missed out on that one, don’t worry, you can still hit Collabapalooza in North Park this weekend. This event is basically the San Diego brewing scene in a nutshell. It’s a one of a kind beerfest: all small-batch, specialty collaborations, that not available anywhere else. This event was voted BEST beer event of 2017, voted by reader of West Coaster… THE beer magazine of SD. If you can, get out there and enjoy what makes our community and industry so special.

Beer week goes through this Sunday, November 11th, so for the love of all things scared, please get out to your local breweries and beer bars and enjoy what makes San Diego the largest seller of booze in the country.

PS—the app also is offering a LYFT promo code: SDBW18
Use it and be safe, please!