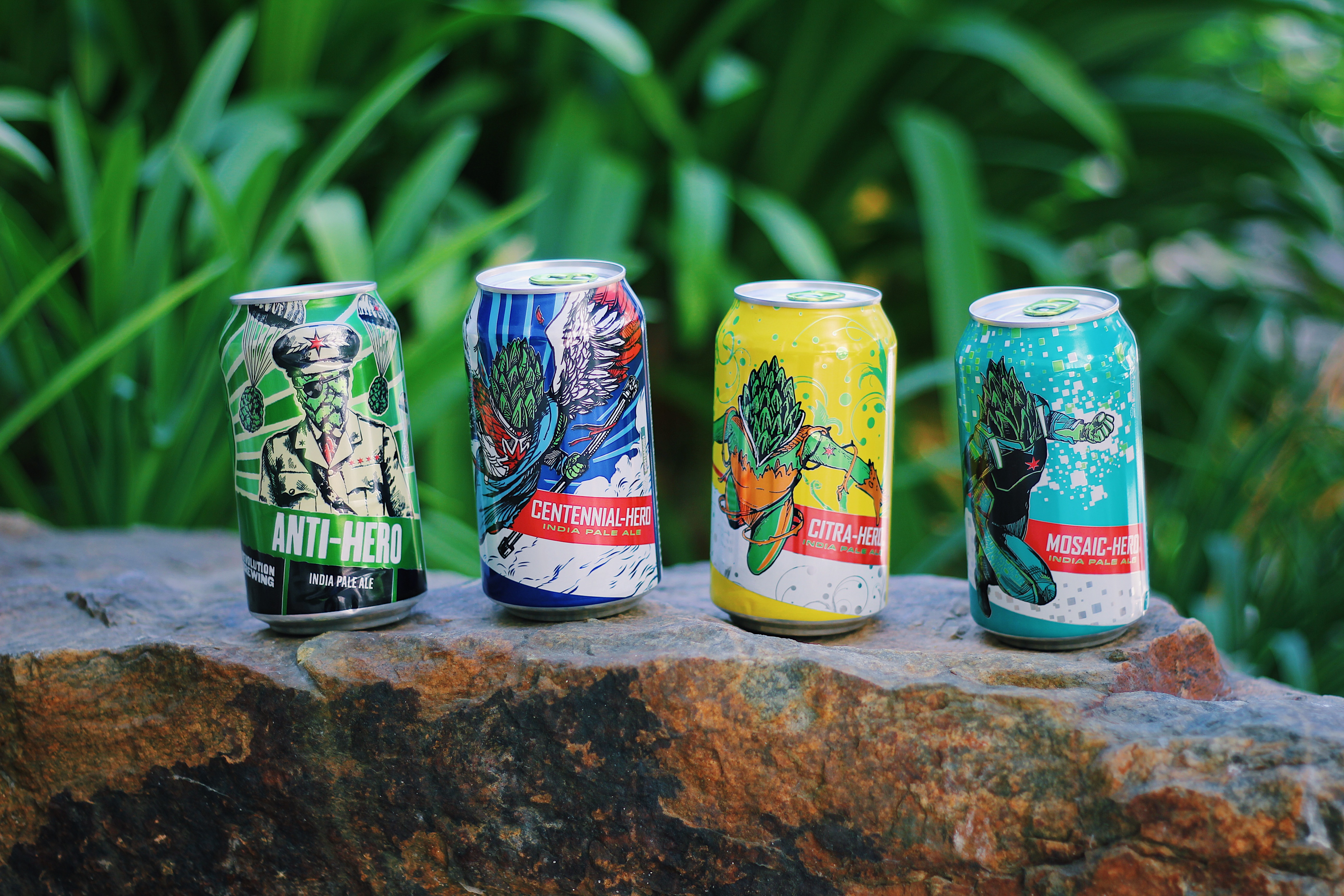 I recently tried League of Heroes: Issue 4 (because comic books) from Revolution Brewing, based in Chicago. The League of Heroes is an IPA series that Revolution puts out about 3 times a year, each time introducing at least one new Hero (aka new beer). This issue is absolutely fantastic, (granted, it is the only one I’ve tried), but still, it’s basically The Avengers– back when that was easily the best superhero movie that was out at the time. This particular series, anchored by their flagship IPA, Anti-Hero, includes Centennial-Hero, Citra-Hero, and Mosaic-Hero, each highlighting a different individual hop.

Admittedly, this was the first I had heard of Revolution Brewing but just based on the name, a hero series made sense to me. But what they actually did with these beers is so much better than just attaching a clever name to them. 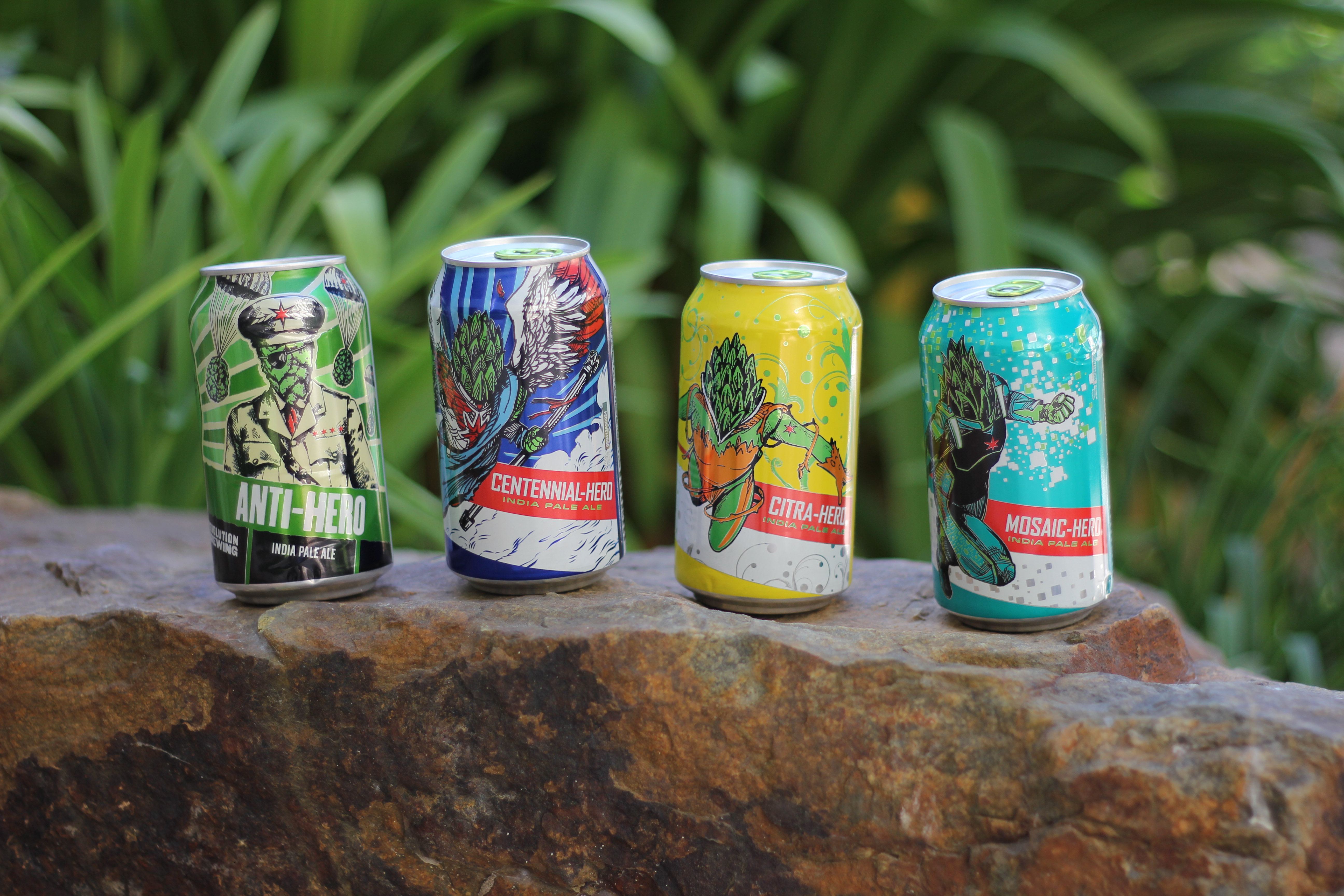 Now, I’m not, NOT a comics/superhero fan, but I also don’t (and won’t) go wait in lines at midnight to see the movies that said, this is one the coolest marketing campaigns I’ve seen maybe ever. It’s hip, relevant, iconic, and the artwork is phenomenal. I mean, the description page even includes a comic strip introducing each new character, for goodness sake. While the comic is great, the cans themselves could literally be considered artwork to any beer lover.

The personality of the individual hop is showcased in each respective beer, really highlighting the flavors each hop can bring to the table. Yet, none come off in an overpowering or harsh way, like some single-hop beers do. These brews truly accentuate the best aspects of each hop, resulting in an incredibly balanced, extremely drinkable, highlight-reel of a series. The product itself is delicious (yes, all of them), and the spirit of the whole line is rooted in the history of the city it’s brewed in yes please! In short, it’s the hero squad I never knew I was waiting for.

THE THING ABOUT HOPS

Hoppy is no longer a descriptive enough adjective. We expect IPAs to be hoppy, which on the west coast, used to simply translate to: bitter. We talk a lot about the different kinds of hops, but honestly, unless you drink a LOT of beer and take a LOT of notes, you probably aren’t even paying attention beyond whether or not a beer tastes good. And unless you have a very refined palate and really do your homework, you probably aren’t able to pick out hops based strictly on blind taste.

Enter the League of Heroes. Outside of just being great beers, this is the perfect series to discover hops preferences. It’s a great way to figure out what hops you like the most’ or which ones you don’t like at all.

*A BRIEF SIDE-NOTE:*
LET’S JUST GET THIS OUT OF THE WAY UP FRONT:
GETTING AROUND THE MARVEL/DISNEY COPYRIGHT DESERVES AN AWARD IN AND OF ITSELF. IT CERTAINLY WOULDN’T BE A GREAT LEAP (AT ALL) TO ASSOCIATE EACH OF THESE BREWS WITH AN AVENGERS CHARACTER BASED OFF OF THE ARTWORK ALONE  BEYOND THAT, THE TASTING NOTES COULD ALSO BE INTERPRETED TO CORRESPOND WITH EACH CHARACTER. COINCIDENCE? I THINK NOT.

Anti-Hero is one of Revolution’s core beers and their flagship IPA. As such, this multi-demensional brew highlights a blend of hops, rather than a just one. You can definitely pick up multiple hop profiles in each sip, but they are never battling with each another, each having their moment to shine. That said, the transition between the notes could be a bit smoother.

Described as the Lord of the C hops by Revolution, this brew is piney and floral on the nose. It’s very traditional and reminiscent of a West Coast IPA (aromatically at least). The beer itself is very balanced; it’s not as heavy and bitter as some IPA styles and also has some juicy aspects, making it very drinkable and really, really tasty. Hard to go wrong on this one.

If Centennial is the Lord of the C-hops, then Citra is the God of legends. The Citra-Hero is everything you think of when you think of Citra hops: juicy, fruity, and incredibly easy to drink. This is a solid beer that can quickly become a reliable favorite, while still staying lighthearted and delicious every time. In a word: irresistible.

Fun fact: this counterpart suggestion works two-fold because Thor is currently a female in the comics, and that’s how she’s depicted on the can as well.

Mosaic-Hero is not a subtle brew, but Mosaic is not a subtle hop. This beer is floral and aromatic on the nose, coming through bold and sharp on the taste. The bitterness of the Mosaic hop is very prominent on the back end, which can rub some people the wrong way, but overall, this is well-rounded, refined brew. As someone who is not a fan of mosaic hops, this was still extremely drinkable (which is actually a first for me).

These are heroes my IPA-loving self always dreamed of, but never expected to actually come into my life. Dreams do come true!

Overall, all of these beers were great. Seriously. Every single one was a good beer. That’s not always a given. This was a killer 4 pack.

I personally haven’t been to Chicago, but if this is the quality of beer they’re producing out there, I may have to make a trip. And soon.